Seven Common Conversation Errors… and How to Remedy Them 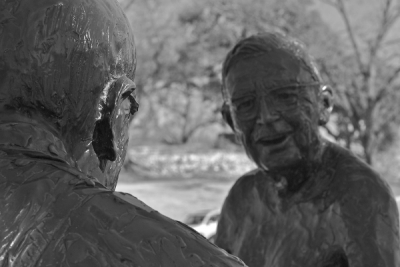 Most of us think we know how to have a conversation and so do it without thinking, but there is actually an art to conversation and it’s a skill well worth developing. If we want to do it correctly we must avoid the following common errors...

You’ve probably been in a conversation when the person telling the story forgets a name or a date and spends the next few minutes trying to remember it, instead of getting on with the story. It’s tedious and boring! You couldn’t have cared less about the name or the date – you just wanted to hear the story.

Cut the detail. Names, dates, years, model of car etc. are usually not important. If you can tell the story without them, then do so. When it comes to conversation, the less verbal clutter the better.

If you have been chatting to a friend when a third person comes up to speak to them, you will know how uncomfortable it is if you are not promptly introduced. You stand listening to the two of them feeling like a spare part, with both you and the new comer glancing at each other awkwardly, wondering who the other is.

Make introductions promptly. If someone comes over to talk to you, introduce them to the others as soon as you and the newcomer have greeted each other. Smoothly make it a part of the greeting.

If you are the newcomer and you are not being introduced, don’t hesitate to introduce yourself. It may be that your acquaintance has either forgotten your name or the other person’s. By introducing yourself, you save them from embarrassment.

When it comes to conversation, the sooner you make introductions the better.

Conversation Error No. 3 – Not Admitting you Have Forgotten Their Name!

Ever had an entire conversation with someone, while desperately trying to remember their name? The chances are you have, because it’s something that happens to most of us from time to time. It can be embarrassing – especially if you have to make introductions and can’t! It is certainly difficult, and while you are racking your brain to come up with their name, you are not paying attention to what they are saying. This can make you appear aloof or disinterested, which is neither conducive to good conversation nor good relations.

If someone comes over to talk to you and you cannot remember their name, apologise and admit you’ve forgotten their name as soon as possible. Then you can get on with enjoying the conversation.

If you go over to greet someone that you have not seen in a long time, or who you do not know well, then volunteer your name as you greet them - to save them the embarrassment of having to admit they don’t know your name.

It’s ok to admit you have forgotten someone’s name – it happens to all of us from time to time!

Conversation Error No. 4 – Always Bringing Yourself into the Conversation

Do you know people who always talk about themselves? For every topic raised in conversation, they have a bigger, better or more dramatic version of what happened to them? Do you try to avoid them at social functions? Most likely you do… because they are SO boring! They tend to dominate the conversation and turn it to always be about themselves. It prevents others from contributing and prevents an interesting variety of stories from being shared.

Conversation Error No. 5 – Pretending you Understand

Have you ever been in a conversation with someone who spoke ‘over your head’, using specialised language or jargon or words that were not part of your vocabulary, so that you didn’t really understand what they were talking about? It can make us feel stupid, so we pretend we know what’s going on!  The result is that the conversation is one-sided and boring, and we avoid future conversations with that person.

If you don’t understand – ask! No one can know everything about everything, so it’s ok to ask questions or admit to a lack of knowledge on topics that you know little about. It’s the way we learn. Nobody minds if you don’t fully understand their subject of interest – it gives them a chance to shine and show off their own knowledge!

And don’t be that person that nobody understands. The sign of intelligence is not the person who can trot out big words or use technical jargon; it’s the person who can speak at the level of their audience – whoever that audience is – without being patronising or condescending.

Conversation Error No. 6 – Not Picking up Social Cues

You probably have and so know that it’s a difficult and uncomfortable situation to be in. To avoid it happening again, we think twice about inviting such people to join us.

Pay attention to social cues and ‘read’ the nonverbal messages of your audience (the message the other person(s) are giving you without actually saying it with words). Be aware of their body language – are they interested or bored? Do they want to leave or continue chatting? Are they comfortable or uncomfortable with the topic of conversation? And respond appropriately.

Conversation Error No. 7 – Not including Everyone in the Conversation

Ever joined a group chatting together at a party and felt like an outsider because you don’t know what they are talking about? It’s distressing and you wish you had never come over to join them.

When someone comes over to join your conversation, immediately help them to join in and feel part of the conversation, by telling the newcomer what the conversation is about. For example, “Hi Mary. Welcome. John is just telling us about his holiday in Morocco.” And then let John continue what he was saying. You can say this quietly as an aside to Mary alone, or say it loudly for everyone to hear. It does mean interrupting John for a few seconds, but this is not as rude as it would be to ignore Mary.

For more information about conversations please read my article The Art of Conversation.