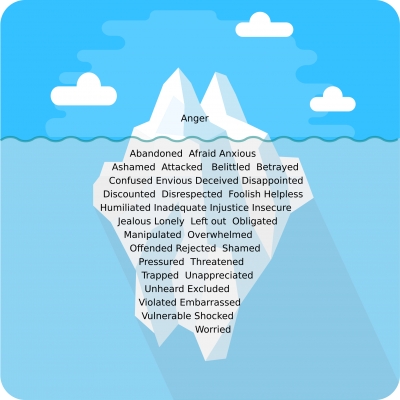 Icebergs are deceiving because what you see on the surface is usually only a small fraction of what lies below.

Anger is exactly like an iceberg – it is easy to observe on the surface, but it has so many other hidden emotions below the surface.

What is Going on?

The bottom line is that beneath everyone’s anger lies a reason. Although it’s a valid emotion on its own, anger often indicates other emotions that need to be addressed or validated.

So while anger may be the visible emotion, there will be some sort of emotional pain hidden under the surface and instead of dealing with that pain directly, we turn it into anger as a way to redirect it. In a sense we are using anger to protect those underlying emotions. Anger is often seen as more acceptable than other emotions. A person may express anger to mask emotions that cause them to feel vulnerable.  Sadness can get turned into anger. Anxiety can be turned into anger. Embarrassment can get turned into anger. Rejection, shame, resentment, disappointment or any other uncomfortable or painful emotion can show up as anger.

What Emotions lie Beneath Anger?

Anger triggers are people, places, situations and circumstances that trigger deep-seated emotions. Anger may be fuelled by different emotions at different times or by a combination of emotions. Some of the emotions that are likely to underlie anger include feeling:

What Should we do with the Anger?

Although anger is often referred to as a “negative emotion”, is neither a positive nor a negative emotion. However, it can be an uncomfortable emotion and we need to be able to understand it, feel it and process it if we want to ensure optimal wellbeing. But, when I say "feel it and process it", I do not mean 'act-out" your anger. Although you can feel angry, it is absolutely not appropriate to be verbally or physically aggressive and violent.

Learning to identify the particular emotions under specific outbursts of anger can be incredibly powerful because it will help you to process these underlying emotions more directly and enable you to express them more openly, which is a healthier response than avoiding them.

You can use your anger as a useful tool to help you understand what’s going on for you. When you feel anger rising, ask yourself “What’s really going on for me? What’s the emotion under this anger?”

With the answers to those questions, you can then make conscious decisions about what you want to do to deal with the situation. You can ask yourself what would be helpful to change - in yourself or the conditions you find yourself in.

An example of this might be a parent losing a small child in a large store:

The parent is afraid that the child is lost and as they search for the child their fear, about all the terrible things might have happened to the child, increases.

When the child is eventually found, instead of expressing their fear to the child, the parent expresses anger - possibly shouting at, berating, or even hitting the child. The child, who may have been scared at being lost or perhaps completely unaware that they were in fact ‘lost’, will be confused and upset by the parent’s anger.

It would be better for the parent to express their fear to the child in a verbally direct message. For example: “I was really scared that you were lost or taken by somebody.” That can help relieve the parent’s pent up fear and give the child more understanding about why they shouldn't have wandered off.

You can get to a place of experiencing a lot less anger when you learn how to deal with the underlying emotions directly.

Of course if it is someone else who is angry with you, try to do the same; try to identify the real underlying reason for their anger and deal with that.

Where there is anger there is always pain underneath.

For more on anger and how to manage it, please read my articles: