The Pareto Principle is an unscientific phenomenon that is also known as the Pareto Rule, the Pareto Law, the 80/20 Rule, the Law of the Vital Few and the Principle of Factor Sparsity.

Where it Came From

In 1906, an Italian economist, Vilfredo Pareto, created a mathematical formula describing the unequal distribution of wealth. (See footnote). Pareto observed that roughly twenty percent of the people controlled or owned eighty percent of the wealth.

After Pareto made his observation and created his formula, many others observed similar phenomena in their own areas of expertise.

Quality Management pioneer, Dr. Joseph Juran, working in the US in the 1930s and ‘40s recognized a universal principle he called the "vital few and trivial many". In an early work, a lack of precision on Juran's part made it appear that he was applying Pareto's observations about economics to a broader body of work. The name Pareto's Principle stuck, probably because it sounded better than Juran's Principle.

Regardless of the naming origins, Dr. Juran's “vital few and trivial many” observation (the principle that 20 percent of a set is generally responsible for 80 percent of a related result) became known as Pareto's Principle or the 80/20 Rule.

You can apply the 80/20 rule to almost anything, from manufacturing, management and human resources to the physical world.

In Health and Safety

Getting to Grips With Pareto’s Principle (The 80/20 Rule)

Although Pareto’s Principle is simple enough to understand, there are two common misconceptions…

The key point is that the Pareto Principle is the observation (not law) that most things in life (effort, reward, output) are not distributed evenly – some contribute more than others.

Take a look at the graph below: 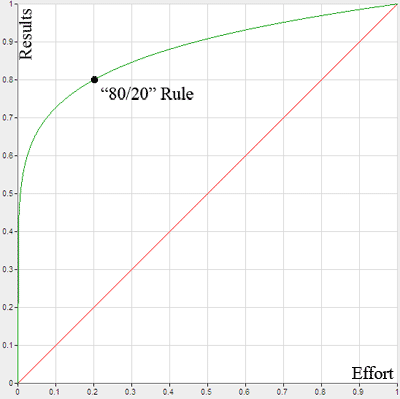 The red line represents what many people would consider the ‘perfect world’ where every effort/thing contributes equally. That is, every employee would contribute the same amount, every project would be equally important and every mobile phone feature would be equally loved by users. But that isn’t always the case.

The green line represents Pareto’s Principle (The 80/20 Rule) which observes that most things have an unequal distribution. Out of 5 things, perhaps 1 will be ‘cool’. That cool thing/idea/person will result in the greater part of the impact of the group.

The main point to understand is that most things are not 1/1, where each unit of input (effort, time, labour) contributes exactly the same amount of output.

The Pareto Principle helps you realize that the majority of results come from a minority of inputs. Knowing this can make you far more effective, because if…

The examples go on. The point is to realize that you can often focus your effort on the 20 percent that makes a difference, instead of the 80 percent that doesn’t add much.

In economic terms, there is diminishing marginal benefit. This is related to the law of diminishing returns: with each additional hour of effort, each extra worker is adding less ‘oomph’ to the final result. By the end, you are spending lots of time on the minor details.

How Pareto’s Principle Can Help YOU!

The value of the Pareto Principle lies in reminding you to focus 80 percent of your time and energy on the 20 percent that really matters.

If we apply Pareto’s Principle to all of the tasks we perform throughout a day, we will realise that only 20 percent really matter. Those tasks in the 20 percent will most likely produce 80 percent of our results, so it is critical that we identify and focus on those things. Don't just ‘work smart’ – work smart on the right things. As you rush about your day trying to crisis manage and complete all the tasks set, remind yourself of the critical 20 percent you need to focus on and if anything in the list of activities and action items has to fall by the wayside and left undone, be sure it isn’t one of the critical 20 percent.

Put in only the amount of effort needed to get impact from your exertion – it’s usually the first 20 percent (or 10 percent, or 30 percent — the exact amount can vary). For example:

When you are seeking top quality, you need all 100 percent. When you are trying to optimize the result for your effort, focusing on the critical 20 percent is a time-saver. See what activities generate the most results and give them your appropriate attention.

A Word of Warning

A more recent application or implementation of management theory that’s been making the rounds for a few years (both in books and lectures/seminars) suggests that we interpret Pareto's Principle in an approach sometimes referred to as ‘Superstar Management’. Its supporters claim that since 20 percent of your employees likely produce 80 percent of your results you should focus your limited time in management of only that 20 percent – the so-called superstars. The problem with this is that it overlooks the fact that 80 percent of your time should be spent doing the things that are really important, or most likely to deliver the greatest return. By helping your ‘good’ salespeople become better, you are more likely to reap greater results than by dedicating the same management effort to helping the fewer ‘superstars’ become terrific.

It is wise to evaluate the various situations carefully and apply the Pareto Principle appropriately – and wisely.

You might see statements that Pareto's original wealth distribution study analysed data for Italian society. But it wasn't Italy; it was England. This misunderstanding persists perhaps because of faulty inferences/assumptions based on Pareto's Italian parentage and early life in Italy.