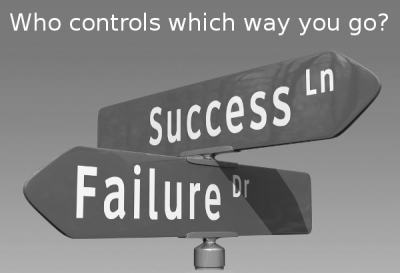 Image by: Chris Potter
Contents
Do you believe that people are successful because they work hard and earn their success? Or is it just about being in the right place at the right time? In other words, do you control your life or does something else (like a god, luck or destiny) control it? Your answer depends on your “Locus of Control”.

What Does “Locus of Control” Mean?

Locus of control describes the degree to which individuals believe that outcomes result either from their own behaviour (control resides within them) or from forces that are external to themselves (control resides externally with powerful others or the situation).

It is important to note that like other preferences, this is a spectrum. Some people have a wholly internal or wholly external locus of control, but many will have a balance of both views, perhaps varying with the situation. For example, some may be more internal at home but more external at work.

What is an External Locus of Control?

Rotter (1990) describes the external locus of control as:

“The degree to which persons expect that the reinforcement or outcome is a function of chance, luck, or fate, is under the control of powerful others, or is simply unpredictable.”

So people with an external locus of control tend to be fatalistic – they see things as happening to them without having the ability to do anything about it.

This mind-set tends to make people with an external locus of control more passive and accepting. When they succeed, they are more likely to attribute this to luck, than to their own efforts.

People with an external locus of control are less likely to have what are known as expectancy shifts. That is they will tend to see similar events as likely to have similar outcomes. As a result they step back from events because they assume that they cannot make a difference.

Research has found that younger and older people tend to have a higher external locus of control than people in middle age.

What is an Internal Locus of Control?

People with a high internal locus of control believe in their own ability to control themselves and influence the world around them. They see their future as being in their own hands and that their own choices lead to success or failure.

Rotter (1990) describes the internal locus of control as:

Their belief in their ability to change things may well make people with a high internal locus of control more confident so that they will seek information that will help them influence people and situations. They will also likely be more motivated and success-oriented. These beliefs may even lead them to be more politically active.

People with a high internal locus of control are more likely to have expectancy shifts. That is, a sequence of similar events are expected to have different outcomes. They tend to be more specific, to generalise less and to consider each situation as unique.

Having an internal locus of control can also be referred to as "self-agency", "personal control", "self-determination", “empowered” etc.

People in middle age tend to have the highest internal locus of control. This comes from the increased ability to influence things going on in their lives and the realization that much of what happens to them is a result of what they do.

Research has found the following trends:

An external and internal locus of control can be summarised as below:

Bi-locals can take personal responsibility for their actions, and the resulting consequences, while remaining capable of relying upon and having faith in outside resources. Bi-locals are known to handle stress and cope with their diseases more efficiently by having the mixture of internal and external locus of control.

An example of this mixed system, would be alcoholics who accept the fact that although they may have been predisposed to alcoholism, they brought the disease upon themselves and remain open to treatment, acknowledging that there are people, mainly doctors and therapists, who are trying to cure their addiction, and on whom they should rely.

Getting the Balance Right

It’s important, however, to caution against falling into the overly simplistic view that “internal is good and external is bad”, because this is not always the case. Important subtleties and complexities need to be considered.  For example:

Ideally, one should aim to have a healthy combination of the internal and external views in your life in order to avoid feeling like a loser and be able to better direct blame and reward. Learning a balance and adjusting your locus of control is something that can be done at any age and any stage of life.

It should be clear then, that our locus of control is closely linked to our sense of self-worth. Having too much of either view can lead to damage and feelings of worthlessness, depression and hopelessness. It is best to view your life as in your control, but also accept that other factors will play a part. This will help avoid unjustified blame in any area of life and control.

More About Locus of Control

The concept of ‘Locus of Control’ was developed originally by Julian Rotter in 1954. It has since become an important aspect of personality studies.

The full name Rotter gave the construct was “Locus of Control of Reinforcement”.  In giving it this name, Rotter was bridging behavioural and cognitive psychology.  Rotter's view was that behaviour was largely guided by "reinforcements" (rewards and punishments) and that through contingencies such as rewards and punishments, individuals come to hold beliefs about what causes their actions.  These beliefs, in turn, guide what kinds of attitudes and behaviours people adopt.  This understanding of Locus of Control is consistent, for example, with Philip Zimbardo (a psychologist) who said:

Can we Change our Locus of Control?

The short answer is yes.

A factor which affects our locus of control is the stability of the causal factor. There are four common causes – ability, task difficulty, effort and luck and each relates to how stable or unstable their external or internal locus of control is, as shown in the diagram below:

If we use the example of someone who has failed an exam, the table above shows that

Understanding the preference and the stability of the cause being discussed is helpful. You can use this knowledge in the following ways:

How can I Develop an Internal Locus of Control?

There are a few things you need to do to develop an Internal Locus of Control. They are to:

Recognize that you always have a choice. Making no choice is actually a choice in and of itself, and it's your choice to allow other people or events to decide for you.

Set goals for yourself and note how, by working towards and achieving these, you are controlling what happens in your life. As you do this, you'll find that your self-confidence quickly builds.

Develop decision-making and problem-solving skills so that you can feel more confident and in control of what happens. With these tools, you'll find that you can understand and navigate through situations that would otherwise damage you.

Pay attention to your ‘head-talk’ – that little voice in your head that constantly talks to you. When you hear yourself saying things like, "I have no choice" or "There's nothing I can do", step back and remind yourself that you do, in fact, have some degree of control or influence. It's your choice whether you exercise it or not. Of course, sometimes the control you have is only over your own attitude to the situation. In this case, although you may not be able to change the circumstances, you can choose not to be a victim. Some sessions of Cognitive Behavioural therapy might assist you to do this.