My Life Lesson Learnt in Tanzania 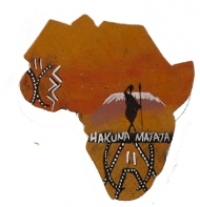 During my stay in Tanzania, I was fortunate enough to visit the Ngorongoro Crater, located inside the Nogorongoro Conservation Area. To get there, we had to drive up a steep pass, which cut through really beautiful vegetation and indigenous bush. As we wound our way upwards, I was struck by the enormity of my surroundings. It felt as though my guide and I could be the last two people left on Earth. We really were in the middle of nowhere!

At the top of the pass, we stopped to read a plaque, which had been attached to a small stone wall. The wording on the plaque read: "A candle loses nothing by lighting another candle." This famous quote by Father James Keller was the last thing I expected to read on top of an African pass in the middle of a UNESCO World Heritage Site! I was amazed – not only at the profundity of the words, but that someone had taken the time to have them engraved on a plaque and placed in one of the most remote areas I had ever visited. The person who had done this would never know who stopped to read the plaque, or whether the words touched the people who read them. But he did it anyway.

The life lesson here is that if something is meaningful to us, we should just do it, without the intent of personal gain or worrying about whether or not other people will understand our reasons, or take pleasure in our actions. We should do it for no other reason than it is worthwhile.