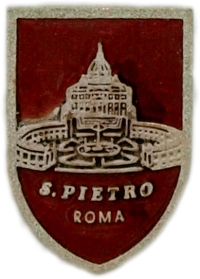 While travelling in Italy I visited the magnificent St Peter’s Basilica located in the Vatican City. Inside is a larger-than-life bronze statue of St. Peter — his right hand extended to confer a blessing, while his left hand clutches the keys of the Kingdom. The statue is mounted on a tall alabaster pedestal, so that the feet are at eye-level. In medieval times pilgrims would fervently kiss or at least rub the right foot, which was extended forward from the pedestal, at the same time offering a prayer to St. Peter to be merciful and open the heavenly gates for them, if they should die while on the pilgrimage.  Over the years the bronze toes have been worn smooth.

While watching the people,  I was fascinated to see that almost every one of them reached out to rub the foot. Although most of the tourists were neither Catholic nor pilgrims, they still ‘followed the crowd’.

The lesson I learnt is that following the crowd is a survival instinct. Across the generations, people have learned that survival depends on banding together and working as a group. There is safety in numbers. All humans have inherited this legacy and it is shown in the security we feel when we ‘follow the crowd’.