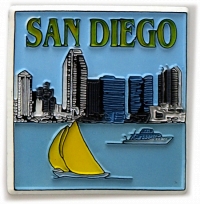 In 1994, I took a 10-month working holiday in the United States, and was fortunate to see many of the more famous attractions in cities across the country during this time. One of the attractions that most impressed me was Sea World in San Diego. Of course I realise that, almost 20 years on, these large “super-aquariums” are pretty common place – South Africa has uShaka Marine World in Durban and the Two Oceans Aquarium in Cape Town, and there are others in Australia and Europe. At the time, however, I was bowled over by Sea World. It was like Disneyland, but with fish! It was simply the best aquarium I had ever seen.

The lesson here is that it pays to be bold. If you do something unheard of, daring and completely revolutionary today, you may well be setting a trend for the future.