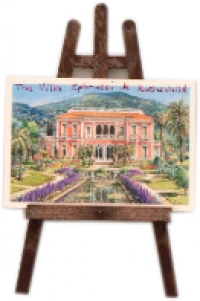 One of my favourite places to visit in France is the Villa Ephrussi de Rothschild in Saint-Jean-Cap-Ferrat on the French Riviera. Built in the early 1900's by Baroness Beatrice de Rothschild, the villa is today the only great house on the Riviera open to the public. It is an extremely impressive example of the magnificent summer residences built by the very wealthy of the day, but it is the nine themed gardens in which it is set which are the true masterpieces. Strolling visitors will be surprised and enchanted by the exact symmetry of the formal French garden, the lush vegetation of the Spanish and Florentine gardens, the fragrant profusion of the rose garden, the rare trees in the exotic garden, and the archaeological remains in the Stone garden. I was really struck by how the Baroness's dream villa and its magnificent gardens are still bringing joy to thousands of people from all over the world over a hundred years later.

Something worth doing is worth doing well. The Baroness built something beautiful, which took many years to complete, but she made sure it was exactly as she wanted. Her determination to get it right has left us with a lasting legacy which will continue to bring pleasure to people for generations to come.