My Life Lesson Learnt in Lusaka 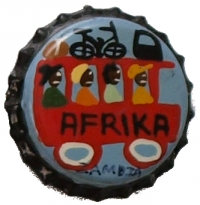 On an outing one day while visiting family in Lusaka, Zambia, we drove past a huge traffic island which had been landscaped with grass and pretty flowers – an oasis in the middle of the chaotic, centre-of-town traffic. I was amazed to see a wedding party posing for photos on this island, seemingly oblivious to the traffic hurtling around them – old buses belching exhaust fumes, dilapidated cars with people waving and cheering out of the windows, souped-up sports cars hooting their horns...At the time, I thought it was hilarious.

On reflection, however, I was humbled by the profound lesson –
I realised that if the photographer was clever with his camera angles, he could avoid capturing the traffic in his shots, and it would look as though the bride and groom had been photographed in beautiful gardens. The wedding couple would no doubt look at their photos with pride and fond remembrance.

Life is what you make it – so make the most of what you have, and don't allow the less-than-perfect to mar your day, or your life. Rejoice in magnificent simplicity, and don't place value on the trappings, but rather in the significance of the occasion.