My Life Lesson Learnt in Jerez 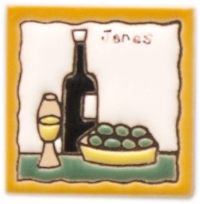 While visiting Jerez, in southern Spain, I decided to take a tour of its biggest winery, Bodega Tio Pepe, famous for its sherry production. While on the tour we were told all about the history of sherry production in the region, shown all the major cellars of the bodega and given tiny glasses of sherry to taste. I remember it being a most interesting tour at the time, but all the facts and statistics have long since been forgotten.

What I have not forgotten, however, is the delightful story we were told about a little mouse who would visit the cellars in the quiet of the evening. The mouse would scramble up to drink the last drops of sherry still in the taps just after the wine-maker had done his tasting. Of course getting up to the taps was a struggle for the little mouse, and the wine-maker took pity on it. There in the middle of the huge cellar was a tiny barrel with a tiny ladder leaning against it – for mouse to climb up. Each evening a small glass of sherry and a piece of cheese is placed on top. I am not sure that the story is true, but it was a moving story and the story-teller created just enough doubt in our minds that we could believe it if we wanted to.

The life lesson here is that facts and statistics are easily forgotten, but a simple heart-warming story can be remembered forever. As we go through life we must not just concentrate on the facts and routines of daily life, but rather try to do something special for others that will create never-to-be-forgotten stories.