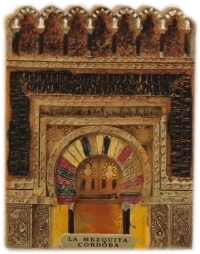 While travelling in Córdoba, Spain, I visited the Great Mosque of Córdoba. It is a beautiful and fascinating building that symbolizes the many religious changes Córdoba has undergone over the centuries. Today, the Mezquita is the Cathedral of Córdoba, but the vast majority of its art and architecture is the work of Islamic architects, who built it as a mosque in the 8th century. . The shell-shaped ceiling of the magnificent Mihrab is carved from a single block of marble and the chambers on either side are decorated with exquisite Byzantine mosaics of gold. The worn flagstones indicate where pilgrims crouched on their knees.

I wanted a sense of the visual perspective which the pilgrims had, and so I knelt down on the floor to view the Mihrab. Within seconds I had two security guards bearing down on me shouting and gesticulating that I must immediately stand up. Little did I know that since the early 2000s Spanish Muslims have lobbied the Roman Catholic Church to allow them to pray in the cathedral, only to be rejected on multiple occasions. My innocent action appeared to be a challenge/protest and the guards were not having it!

The lesson here is to be aware that simple, innocent actions can be deeply offensive to others. It is important to be aware of rules, customs and etiquette when visiting unfamiliar places.