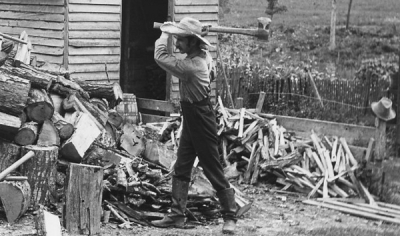 Image by: Tekniska Museet
Contents
Abraham Lincoln is regarded as one of the most important presidents in American history. He was well known for his energy and productivity. Abe Lincoln's productivity secret was to use sharper tools to get the job done more efficiently.

He said: “Give me six hours to chop down a tree and I will spend the first four sharpening the axe.”

Lincoln, who was a skilled woodcutter before becoming president, probably meant this both literally and figuratively. Inefficient tools waste energy. It's better to spend the majority of your time finding and cultivating the best tools for any task.

Sharpening your axe can include things like setting up email filters, installing productivity software, and developing more efficient systems and processes. But (and most of us forget this), the most important ‘tool’ for achieving any task is YOU – your ability to use your mind and body to its full potential. Sadly it is also the one that we most often take for granted. We expect our bodies and minds to just keep on going and going even though we don’t look after them.

Most of us do not give our bodies and minds enough sleep, don’t eat enough nutritional food and don’t drink enough water. We poison our bodies and minds with junk-food, cigarettes, alcohol and a variety of other substances. We exercise too little and don’t take proper breaks. We don’t relax and we don’t enrich ourselves with learning, creativity and beauty. In short, we don’t sharpen our axe!

Here are four variations of an inspirational story which illustrates why it is so important to sharpen your axe.

Once upon a time there was a very strong wood-cutter. He asked for a job from a timber merchant and he got it. The pay was very good and so were the work conditions and for that reason the wood-cutter was determined to do his very best. His boss gave him an axe and showed him the area in the forest where he was to work.

Day after day the woodcutter cut down fewer and fewer trees. His boss came to him and told him that if he did not chop down more trees each day he would lose his job. The wood-cutter needed the job, so he tried harder and harder. He worked during his lunch breaks and tea breaks, but still he could not cut down enough trees. “I must be losing my strength” the wood-cutter thought to himself. He worked over-time, but still it was not enough.

Eventually his boss came to him and told him he was fired. The wood-cutter was really upset, but he knew that he had worked as hard as he could and just did not have enough time to chop more trees. He sadly handed his axe back.

The boss took one look at the axe and asked, “When was the last time you sharpened your axe?”

“Sharpen my axe?” the wood-cutter replied. “I have never sharpened my axe. I have been too busy trying to cut down enough trees.”

Moral of the story:
Don’t get so busy that you don’t take time to sharpen your axe.

Once upon a time there were two men in a wood-chopping contest.  They were tasked with chopping down as many trees in the forest as they could from sun-up to sun-down.  The winner would be rewarded with both fame and fortune.

From morning till noon, both men steadily chopped and chopped.  By noon they were neck and neck, but then one man took a break and stopped chopping.  The other man saw this and thought to himself: “The lazy fool, he’s probably taken a break for lunch. He’s given me a chance to get ahead of him and I will without doubt win this contest!”

A while later the man got back to work. As the day continued he chopped more trees than his hard-working (and hungry) competitor and by mid-afternoon he had taken a clear lead.

When sundown came, the man who had taken the break at noon had chopped almost twice as many trees as the other man, who was drenched in sweat, hungry and exhausted.

“How did you beat me?” he asked puzzled. “You were lazier than I and even took a break for lunch!”

“Ah,” said the other man, “I did take a break, but it was during that break, that I sharpened my axe.”

Moral of the story:
Taking time out to sharpen your axe is worth many hours of hard toil.

Sharpen Your Axe – An Inspirational Story

Tom, a wood-cutter, worked for a timber company for five years but was never given a raise. The timber company then hired Jack and within a year Jack was given a raise. Tom resented Jack being given a raise after only a year and went to his boss to complain about it. The boss said, “You are still cutting the same number of trees you were cutting five years ago. We are a results-oriented company and would be happy to give you a raise if your productivity goes up.” So Tom went back and started working harder and putting in longer hours but he still was not able to cut more trees. He went back to his boss and told him of his difficulty. The boss told Tom to talk to Jack. “Maybe there is something Jack knows that you and I don’t.”

Tom went to Jack and asked how he managed to cut so many trees. Jack answered, “After every tree I cut, I take a break for two minutes and sharpen my axe.”

Moral of the story:
Take time to evaluate yourself and your life and make sure that the tools you are using are sharp!

Have You Sharpened Your Axe?

A young man approached the foreman of a logging crew and asked for a job.

“Let’s see you fell this tree first” said the foreman. The young man stepped forward and skillfully felled the large tree. The foreman was impressed and said to the young man: “You can start on Monday.”

Monday, Tuesday and Wednesday came and went. On Thursday afternoon the foreman came to the young man and said: “You can pick up your pay-check on your way out today.” Startled the young man exclaimed, “But I thought you paid on Friday!” “That’s right,” said the foreman, “but we are letting you go today because you have fallen behind. Our daily felling charts show that you have dropped from first place on Monday to last place today.”

“But I work really hard,” said the young man. “I arrive early, I leave late and I even work through my breaks. Please don’t just fire me.”

The foreman knew this to be true, and sensing the young man’s integrity, stopped and thought for a bit. Then he asked: “Have you been sharpening your axe?”

The young man replied: “No sir. I have been working too hard to take time for that.”

Moral of the story:
Do not work so hard that you don’t take time for the most important things in life - the things that ultimately make you more effective.