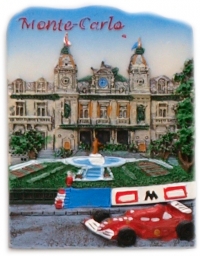 I spent one memorable New Year’s Eve in Monte Carlo, Monaco. I was standing in front of the Grand Casino, surrounded by flashy cars and flashy people. Men and women were dressed to the nines in the most exclusive designer wear, and decorated to the hilt in gold and diamonds.

There was an atmosphere of celebration and festivity, culminating in a frenzy of hugging and kissing at the stroke of midnight. Friends and strangers alike were coming together to welcome in the New Year. Champagne in hand, I was loving every minute of it!

I spotted a tall, well-muscled and handsome man and, embracing the festive spirit evident all around me, I boldly went up to him, threw my arms around him and kissed him, wishing him “Bon Annee!” – Happy New Year in French. Unbelievably, he turned to his friend standing next to him and said, "Oh boy! This is the place to be!" ....in Afrikaans!

I groaned. Of all the men I could have picked, I pick a boy from home.

It turned out he was on a rugby tour from Pretoria. We chatted for a while and then moved on. He later became my bodyguard for the evening, protecting me from an over-enthusiastic Italian man, who wouldn’t take no for an answer. I realised then it was good to have a “boy from home” around.

Sometimes you need to travel far away to really appreciate what you already have at home.