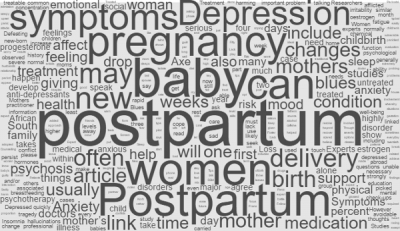 Contents
Studies show that between 10% and 40% of women will be afflicted by postpartum depression. If one takes the lowest figure of 10%, there are at least 50 000 new cases of postpartum depression per year in South Africa alone. The real tragedy is that for many of these women, it is never even picked up, because despite the considerable number of cases, the condition generally remains undiagnosed and untreated.

What Is Postpartum Depression?

The term postpartum (or post-partum) comes from the Latin post partum meaning ‘after childbirth’. So ‘postpartum depression’ is the depression that is linked to pregnancy and childbirth.  It is one of the most common complications of pregnancy.

What Are The Symptoms Of Postpartum Depression?

However, the symptoms of postpartum depression above are also accompanied by other symptoms of major depression, which may include:

Depressed mothers are often weepy, anxious and easily upset, exhausted but unable to sleep. They may have physical symptoms typical of anxiety as well, such as racing heart, rapid breathing, tremors, dizziness, and even panic attacks. They worry obsessively about their baby’s health, while feeling guilty about their own insufficient love and inadequacy as caretakers. Some fear they will harm their baby, although few do.

Sadly, many new mothers are too ashamed to talk about their symptoms, except the physical ones.

For more information on mood disorders please read my articles:

Are There Different Types Of Postpartum Depression?

There are three types of mood changes women can have after giving birth:

Postpartum Blues (Baby Blues) is estimated to affect about 70 percent of women during the first week after delivery and is considered normal.

A new mother has sudden mood swings, such as feeling very happy and then feeling very sad. She may cry for no reason and can feel impatient, irritable, restless, anxious, lonely and sad. The baby blues may last only a few hours or as long as one to two weeks after delivery. The baby blues does not usually require treatment from a health care provider. It goes away on its own and rarely requires more than a few days of rest and support. Often, joining a support group of new moms or talking with other moms helps.

Postpartum Depression occurs during pregnancy or within four weeks after childbirth and can happen after the birth of any child (not just the first child).

A woman can have feelings similar to the baby blues - sadness, apathy, despair, anxiety and irritability, but she feels them much more strongly than she would with the baby blues. Postpartum depression will affect the woman’s ability to function (hinder her ability to do the things she needs to do every day) because symptoms can include lack of appetite, inability to sleep and highly impaired concentration and decision-making. Experts say that if the symptoms of postpartum depression persist for more than two weeks the woman should seek professional help, because if she doesn’t the symptoms can get worse. While postpartum depression is a serious condition, it can be treated successfully with medication and counselling.

Postpartum Psychosis is a very serious mental illness that can affect new mothers. At the other end of the spectrum from the baby blues, it progresses quickly from irritability to irrationality. This condition, which affects about one in a thousand women, can happen quickly, most often in the first four weeks after delivery.

Women who have postpartum psychosis need treatment right away and almost always need medication. Sometimes women are put into the hospital because they are at risk for hurting themselves and/or their baby.

Researchers have speculated that an unplanned pregnancy, a difficult pregnancy, complications during delivery and giving birth to twins or triplets make a woman more prone to postpartum depression, but studies have not borne out or proved these theories.

Instead, researchers now suspect that postpartum depression is linked to chemical, social and psychological changes associated with pregnancy and having a baby.

The social and psychological changes are brought about by the stress of the major life change associated with having a baby.

Who Is At Risk For Postpartum Depression?

Most new mothers experience the ‘baby blues’ after delivery. About one out of every 10 of these women will develop a more severe and longer-lasting depression and about one in 1,000 women will develop the more serious condition of postpartum psychosis.

Figures available from abroad indicate that some 10 to 15 percent of women will be afflicted by postpartum depression in the first year after giving birth. Local experts agree that these figures are also representative of the South African population. A study carried out by the Postpartum Depression Support Group also showed that depression can begin before the baby is born. Fifty percent of the women in the study were depressed during pregnancy and in no case was it picked up! A tragedy when you consider that postpartum depression is highly treatable and avoidable.

A number of factors can increase the risk of postpartum depression, including:

When Should A New Mom Seek Professional Treatment?

Experts agree that early treatment is the key; while the worst symptoms may ease over time, some doctors believe that untreated depression leaves women and their children vulnerable to future depression.

Experts also warn that mothers with postpartum depression have a higher proportion of babies with health problems, including failure to thrive. Studies have shown that if the mother is treated, the babies recover too.

A new mom should seek professional help when:

How Is Postpartum Depression Treated?

Postpartum depression is treated differently depending on the type and severity of a woman's symptoms. Treatment options include anti-anxiety or anti-depressant medications, psychotherapy and participation in a support group for emotional support and education.

In the case of postpartum psychosis, drugs used to treat psychosis are usually added. Hospital admission is usually necessary in this case.

Though physiology is involved in postpartum depression, treatment with psychotherapy may be all that is required for women with mild symptoms. Counselling often includes the spouse and sometimes an evaluation of the mother-infant interaction.

The mother is helped to develop coping skills and to resolve any interpersonal conflicts, such as the level of her husband’s involvement with the child. This is often a source of conflict, given the traditional approach adopted by many South African fathers whereby the wife takes care of the children’s needs.

For new mothers with more severe symptom, the treatment usually entails a combination of psychotherapy and anti-depressants. Mothers who opt for medication usually start feeling at least marginally better after a month or so, but they should expect to stay on medication for up to a year after their symptoms disappear.

Women who choose to stop breast-feeding may be able to use oestrogen therapy as an alternative to anti-depressants. The use of oestrogen patches, while still experimental, has produced very positive results.

But experts agree that the most important aspect of the problem is the need to educate patients and doctors. Patients should be taught to recognise the symptoms and doctors to ask about a new mother’s well-being.

The condition is generally glossed over in childbirth preparation classes and pregnancy guidebooks and is not routinely screened for in postpartum check-ups. During the check-ups, the focus is very much on a mother’s physical health rather than her emotional wellbeing. Dr Frans Korb, a South African expert, says it is important that the medical profession does not overlook this very common problem with a new mother’s health. Failure to do so means that a new mother is left to struggle alone with her feelings.

However, studies show that the women who do speak out often battle to find a practitioner who takes their complaint seriously. This often stems from ignorance on the part of the medical practitioner or lack of time or unwillingness to ask more probing questions.

Some pilot studies carried out abroad show that doctors can achieve a very high rate of prevention by administering anti-depressants to high-risk women immediately after delivery. Further studies are necessary to confirm these findings so, for now, the watchwords are education for mothers-to-be and medical practitioners asking questions about a mother’s emotional well-being. Mothers too must speak up and speak out.

Symptoms of obsessive-compulsive disorder may appear or worsen in the postpartum period. The obsessions are usually related to concerns about the baby or harming the baby. Panic disorder may also occur. Both conditions often coexist with depression. For more information about anxiety disorders please read my article Axe Anxiety .

Tips for Coping After Childbirth

Here are some tips that can help you cope with bringing home a new-born baby: