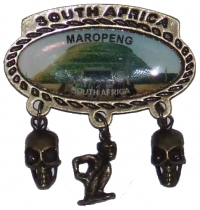 As a South African, there are many things about my country which make me extremely proud. One of these has to be the Sterkfontein Caves, located just outside Johannesburg. I had the opportunity to visit these ancient caves a few months ago, and was humbled by the immense global significance of the caves to our understanding of the origins of people on our planet.

The Sterkfontein Caves are the most famous of the 15 major fossils sites which make up The Cradle of Humankind, an area covering about 47 000 hectares where the 2.3-million year-old fossil Australopithecus africanus (nicknamed "Mrs. Ples") was found in 1947 by Dr. Robert Broom and John T. Robinson. The Caves are owned by the University of the Witwatersrand, whose scientists have been responsible for the main excavations.

What's remarkable is that, despite the many highly qualified and experienced scientists working on the site since its discovery, one of the most significant finds was made by a mere schoolboy, Gert Terblanche, in 1938. He found fossils, including a damaged skull and half a jaw bone, which were later confirmed by Dr Broom as an entirely new genus and species - Paranthropus robustus – dating back over two million years.

Don't ever underestimate what you are capable of. Learn the value of just starting to do something – you may be amazed at what you will achieve.