My Life Lesson Learnt in Victoria 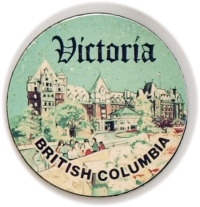 While I was travelling in America, I decided to take a ferry trip from Seattle to Victoria, the capital city of British Columbia, Canada located on the southern tip of Vancouver Island. Victoria is one of the oldest cities in the Pacific Northwest and has retained a large number of its historic buildings. Because my trip was only to be an overnight stay I did as much as I could that first day and made sure that I saw one of its most famous landmarks – the British Columbia Parliament Building. I was duly impressed with the beautiful architecture.

However, that evening I was introduced to a handsome, young local man. We had a drink together and started chatting when he told me that at night the outline of the building is lit up by 3,500 energy efficient light bulbs. He then insisted on taking me in his car to see the sight. What a magnificent spectacle it was! The young man was clearly very proud of his city and happy to show me the sights, but I am sure he had no idea the impact his kindness would have on me, as many years later I still have the vision of that lit building clearly imprinted on my mind and feel again the joy I felt when I actually saw it.

The lesson here is that you never know how much of an impact a seemingly small act of kindness on your part, can have on someone else.